Awake at Dawn #2 by C.C.Hunter 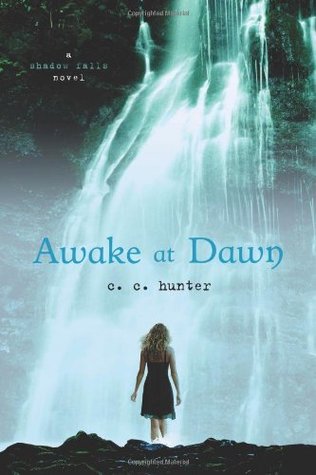 Published: October 11, 2011
Series:
1. Born at Midnight
2. Awake at Dawn
3. Taken at Dusk
4. Whispers at Moonrise
5. at Nightfall
Rating:★★★★
Goodreads Synopsis:
Step into the world of , a camp that helps teens tap into their special…talents. Once you visit, you’ll never forget it—and you’ll never, ever be the same.

From the moment Kylie Galen arrived at Shadow Falls Camp, she’s had one burning question: What am I? Surrounded by vampires, werewolves, shape-shifters, fairies and witches, Kylie longs to figure out her own supernatural identity…and what her burgeoning powers mean. And now she’ll need them more than ever, because she’s being haunted by a new spirit who insists that someone Kylie knows—and loves—will die before the end of the summer. If only she only knew who she was supposed to save. And how…

But giving Kylie the most trouble is her aching heart. Gorgeous werewolf Lucas left camp with another girl, but he’s still visiting Kylie in her dreams. And Derek, a sexy half Fae who’s always been there for her when she needed him, is pushing to get more serious—and growing impatient, especially when Lucas returns. Kylie knows she needs to decide between the boys, and it’s tearing her up inside.

Yet romance will have to wait, because something from the dark side of the supernatural world is hiding in . It’s about to threaten everything she holds dear…and bring her closer to her destiny.

My Review:
Ahhhhh! Okay. At this point I don't know what team I'm on. I am torn between Lucas and Derek like Kylie is! Lucas is mysterious, sexy, strong, kind of scary and  childhood friends with Kylie. But Derek on the other hand, is well amazing. He is sweet, caring, smart, and totally in love with Kylie. This is going to be an interesting series trying to figure out who Kylie ends up with! I also loved the relationship between Miranda and Perry (the powerful shape shifter). Miranda likes Perry but she won't fully commit to it. on the other hand, will not let the sexy vampire Burnett (another camp leader) get close to her at all.  I just loved their interactions as the story continued!
In this book we are back in with Kylie, her friends, the cute boys, and the amazing camp leaders. So Kylie still has no idea what she is except knowing and accepting her ghost whispering abilities. But she is confused and wants to know what she is. So with the help of her best friends Miranda and Della, as well as my favorite camp leaders, Kylie sets out to find more about herself and what role she plays in this new mysterious threat that is haunting the camp. But if she doesn't figure out who is after them then someone close to her will get hurt. This series has been amazing so far. At first I didn't think I would like it at all but all the characters at grew on me. And I can't wait to see what happens next!
Posted by Sammy at 10:28 PM