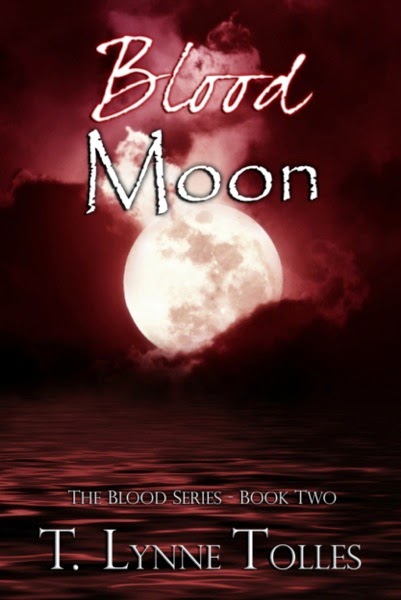 The gang finds themselves up to their eyeballs in family history when  clues are revealed that suggest an evil curse is hidden within the O'Rielly Book of Shadows. An old family diary divulges the O'Rielly family was an integral part in stymying a power hungry witch that took the lives of thirteen young girls and clues to spells whereabouts seem to suggest they're in the O'Rielly Book of Shadows.
One by one young women are reported missing from neighboring towns when two mysterious women show up in town. Is it coincidence? Or has someone come back to complete the unfinished spell from the past? No one knows but when Allison's life is in the balance, the gang pulls together to find a way to stop the past from repeating itself.

Author Bio
T. Lynne Tolles can be found most days, juggling one of two cat muses and a laptop, tripping over an ancient Newfoundland dog and washing a never-ending pile of laundry. When life doesn’t get in the way, she writes paranormal romances for new adults.
Her passion for witches, ghosts, and vampires together with a light-hearted wit are reflected in her loveable characters and the adventures of mystery they unravel to find their happily ever after.

Excerpt One:
Cathy Davis worked late at the UC Santa Cruz campus Friday night. Professor Sorensen had her retype the entire report she finished on Monday. He was so old fashioned, he wouldn’t let her use the computer, even though she explained if she had used a computer in the first place, there would have been a backup file and she wouldn’t have had to retype it.
“Tut, tut, Ms. Davis. I will have no part of that electronic frou frou. Now get to work.”
Why did I take this job? Cathy thought. The money was bad, the hours were worse; she received no college credits for her work, and Professor Sorensen was obviously insane.
“Tut, tut. Who says stuff like that? Winnie the Pooh?” she grumbled to herself under the hum of the 1970’s electric typewriter.
The crazy old coot had gone home and Cathy just finished typing. “Finally. I’ve got to get a life! For that matter, I need to stop talking to myself or they’ll put me in the asylum right next door to Prof. Sorensen.”
She put the report on his desk, grabbed her stuff, and turned out the lights as she went out the door. She had parked at the end of the building next to where the sexy guy with the red 300ZX parked this morning. Of course he was long gone now, but at least this morning she got to say “hello” to him as she walked in. There were no lights out here, but she had been in this parking lot a million times and she’d never seen a car broken into once.
She reached into her purse for her keys. When she pulled them out, they snagged her sweater and dropped to the asphalt by her car. She bent down to grab the keys then someone hit her from behind and everything went dark.

Excerpt Two:
Rowan had about all she could stand of her room. She had hibernated since getting back from Colorado and hearing Blake’s apology. She wasn’t ready to deal with him face to face, but she knew he was in Colorado now with Dean and there was no chance of running into him.
She had received entertaining text messages from both Dean and Blake the day Blake arrived. Neither was dead yet, but according to some of the messages she wouldn’t be surprised to find on or both of them would sustain injuries from the other. Blake was trying very hard to be accommodating and patient, whereas Dean was enjoying making him suffer ‘for her sake’ he told her.
She found Mr. Bear on the table looking quite handsome a couple nights before when she wandered to the kitchen for something to nibble on. She assumed it was Devon who was keeping Darby at bay. At times Darby could hover a little too much when Rowan wanted to be alone and she appreciated that she was being allowed to have some time to reflect. She knew her sister all too well and realized this was probably very hard for her.
Under Mr. Bear she had found a Post-It note from Darby that said:
Interesting reading…
Grandpa George’s diary re: Magic!!!
Darby

At the time she had thumbed through it but wasn’t in the mood to read it. Finally feeling brave enough to poke her head back into the world she made her way to the kitchen to find Darby sitting at the table reading the paper and having coffee.

Excerpt Three:
Dean and Blake headed for the airport on a Thursday morning. Dean didn’t say much on the ride there and it was apparent to Blake he was nervous. If it hadn’t been morning, Blake would have suggested a couple of beers to relax Dean a bit for the ride. He was glad it wasn’t a very long flight and there were no layovers. He felt sure if there had been, Dean might have made a break for the door and gone home on foot.
They got their baggage checked, had boarding passes in hand, and the rental car turned in. Now it was just the waiting game. Blake suggested to Dean he should get a book or a magazine to keep himself occupied and his mind off of flying 10,000+ feet above the ground. Dean opted for a book of Sudoku puzzles. “Good choice,” Blake said, thinking to himself: that ought to keep him busy.
Blake wasn’t sure if he should give Dean the window seat or not. Excited first time flyers often wanted this seat as it was fun to watch during takeoffs and landings. Given Dean’s stress level, he wasn’t sure that was such a good idea. As for Blake, he preferred the aisle seat. With his very long legs, he could stretch them into the aisle when the beverage cart wasn’t passing. He decided to give Dean the choice and thankfully he chose the window seat.
They got settled in their seats when the stewardess went through her speech about emergencies. Dean followed along with the plastic-covered pamphlet in the back of the seat in front of him. He gave Blake a reprimanding look when he didn’t pull his out and follow along, so Blake dutifully pulled his out to make Dean feel better.
Blake heard the baggage being loaded below and with every thump he was sure he saw Dean jump. Blake thought, this is going to be a very long flight. The baggage door closed and Dean jumped again, asking what the noise was.
“It’s okay, Dean, they’re just securing the cargo door. Don’t want your boxers blowing out the door and pelting some poor old gal on her walk to the church bingo now, do we?”
“That can happen?” Dean said in horror.
“No, Dean, not with the cargo door closed. It’s fine. Relax.”
Dean watched out the window as people in orange vests and odd little cars skittered here and there, and the blocks were pulled from the wheels.
“We’re moving,” Dean almost shouted. His hands gripped the ends of the armrests as if holding on for dear life.
“Yah, Dean, we have to move to get in the air.”
“I don’t think I want to do this,” he said and a low, guttural growl.
“It’s a little late for that, Dean. You’ve got to get a handle on your emotions; I don’t want you going all wolf on me.”