Abby Abernathy is a good girl. She doesn’t drink or swear, and she has the appropriate number of cardigans in her wardrobe. Abby believes she has enough distance from the darkness of her past, but when she arrives at college with her best friend, her path to a new beginning is quickly challenged by ’s Walking One-Night Stand.

Travis Maddox, lean, cut, and covered in tattoos, is exactly what Abby wants—and needs—to avoid. He spends his nights winning money in a floating fight ring, and his days as the ultimate college campus charmer. Intrigued by Abby’s resistance to his appeal, Travis tricks her into his daily life with a simple bet. If he loses, he must remain abstinent for a month. If Abby loses, she must live in Travis’s apartment for the same amount of time. Either way, Travis has no idea that he has met his match.
My Review:
Oh. My. Godddd. WOW. Just wow. I was on a roller coaster ride while reading this book. I wanted to slam the book shut, throw it on the floor and have a fit. I had no idea what was coming next and during most of it I thought I was flying off the rails! The story flows flawlessly from one page to the next and you can't help but devour the entire book in one sitting. Which is what I did. I just couldn't have enough and when I thought I did, the author would throw in something interesting and I would be on square one. 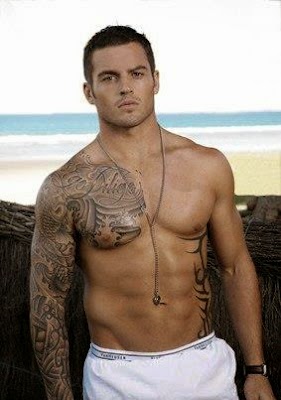 Travis is one of the most controversial characters I have ever read or fallen in love with. He is what people define a true Bad Boy: sexy, possessive, temperamental, jerk, impulsive, has anger-management issues, and at times downright stupid, and also has a little stalker-ish tendencies.
Abby on the other hand, was an okay character for me. At times I just wanted to put my hand in the book and slap her a few times. She is so damn stupid and dumb that even when she makes a good decision later she goes and makes a equally bigger one. Like the time she told Travis they should take things slow (naturally, he was on the brink of rage in response). It's sensible. Then a couple of chapters later she runs off to Vegas to get hitched and 'label' herself as 'Mrs. Maddox'.
Posted by Sammy at 2:36 PM