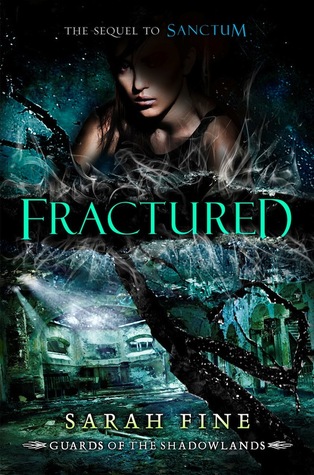 Goodreads Synopsis:
In the week since Lela returned to as Captain of the Guard with Malachi as her second in command, local news has been dominated by chilling sightings of human-like creatures running on all fours. Lela knows there’s only one explanation: the Mazikin have arrived in the land of the living.
Needing to maintain the appearance of a normal life for her foster mother, her probation officer, and her classmates, Lela returns to Warwick High along with Malachi. At night they secretly hunt for the Mazikin nest. To assist, two new Guards from very different parts of the Shadowlands are assigned to Lela’s unit, including the bad boy Jim, who repeatedly challenges Lela's authority. Lela struggles to keep all her Guards on the right side of the law, but their mistakes come at a terrible cost.


As one painful revelation follows another and the Mazikin start targeting those closest to her, Lela finds herself more vulnerable than she’s ever been, wanting a future more than she ever has. With an enemy determined to separate soul from body, one question remains: how much is she willing to sacrifice to protect those she loves?

That's it! I am going to the Mazikin Realm and getting Lieutenant Malachi Sokol out myself. I will do whatever it takes to get Malachi out! Why Sarah Fine? Why? I have to wait till October 2014 to read the third book to find out if Lela rescues Malachi and if they live a happily ever after in the Countryside! *heavy sign* This books ending left me angry, sad, and unsatisfied. ! I don't think I can wait any longer!!!

So this book picks up with Lela and Malachi at school. Lela has become the new captain and Malachi has been sent to assist Lela in fighting the Mazikin. As always Malachi is controlling and overpowering since he has been a captain for hundreds of years. And now taking orders instead of giving them is very difficult for him. Especially, now that Lela is his new captain and she is still learning how to be one. But when there are too many Mazikin terrorizing and murdering innocent people and not enough demon fighters, Lela and Malachi must figure out a way to outsmart the Mazikin leader, who happens to have a personal vendetta against Malachi. Hopefully, we get to find out how Malachi and the Mazikin leader know each other and what caused all this blood shed between them.

Fine was just brilliant at toying with my heart. I was angry, sad, happy, then angry again. It was a never ending roller coaster ride with this book. We never knew when the Mazikin were going to attack or what they had planned. It was frustrating and at times I couldn't help but scream at the book trying to get the characters to do what I wanted. But sadly that didn't work out since this book ended with the biggest cliffhanger ever. It was bigger than the ending of Inception, where you didn't quite know if Leo was still in his subconscious or the real world. Fine definitely left me hanging and wanting more. I know for sure the final book will be a killer and I'm desperate to find out what happens next!
Posted by Sammy at 12:43 PM