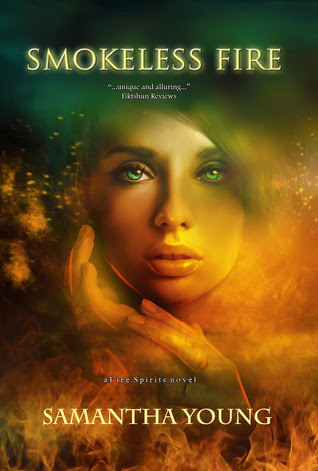 Genre: Jinn, Mythology
Paperback: 358 Pages
Published: October 21, 2011
Series: The Fire Spirits
1.Smokeless Fire
2.Scorched Skies
3.Borrowed Ember
4.Darkness Kindled
Rating: ★★★★★
Goodreads Synopsis:
FEARTHEHEAR
When eighteen year old Ari Johnson is transported from her bedroom into the chilling realm of  - home to the terrifying and mercurial Jinn - she learns a truth that rocks her very world. Suddenly her anxiety over college and her broken friendship with Charlie seem like small change compared to the war she now finds herself stuck in the middle of. Her unease isn’t lessened any by the hot guardian, Jai, who won’t stop following her around everywhere - a Jinn whose loyalty Ari hates to question but must. She has no idea who she can trust.
When the truth burns through her life in its determination to turn it to ashes, Ari will have to battle with ancient deadly creatures, epic family drama and heart-wrenching romantic entanglements.
My Review:
THE COVER IS FREAKEN (pardon the language) GORGEOUS! That is what first caught my attention and it's what made me want to read this book. The main character Ari is beautiful and exactly like how I pictured her to be. She basically raised herself, since her father is always on business trips and her mother has been out of the picture for the past 18 years. Soon she will graduate high school and enter the life of a college student. But one day, when she falls asleep she ends up in a strange place called  in the house of a man who claims he's her real father. That's when all hell breaks lose and Ari's world turns upside down. But her real father in on a business trip--not this strange man who happens to be a Jinn. Ari is confused and lost when she returns home after telling the strange man ( The White King) that she wants nothing to do with him.
In Comes Jai, hired by Ari's uncle (The Red King) to protect her from her fathers evil plans. Jai also happens to be a Jinn bodyguard and helps Ari discover her powers. What can I say about Jai, he's tall, hot with olive skin and bright green eyes. He can be sarcastic, arrogant, and gets under Ari's skin. He has orders to follow her around everywhere and any where (what girl wouldn't want a hottie following her around? sign me up!) to protect her until she can learn to use her powers. Ari will learn new things about herself, fall in love with Jai (saw that one coming from a mile away) and fight to protect her friends and family.
I truly loved the originality of this series. I have never read anything about Jinn before and this series was something new and intriguing for me. There is plenty of action and just enough romance to keep the reader turning pages as quickly as possible. This is an incredible series with lovable characters and it  will surely capture everyone's hearts( cause it sure captured mine)!
Posted by Sammy at 10:21 AM