Forever Too Far #3 by Abbi Glines 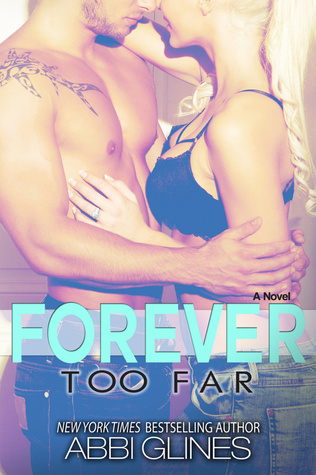 Rush promised her forever... but promises can be broken.

Torn between his love for his family and his love for Blaire, Rush has to find a way to save one without losing the other. In the end one has to be more important. Letting go isn’t easy.

Blaire believed in her fairytale... but no one can live in a fantasy.

Her love for Rush and desire to have a family keep her believing that they can find a way for this to work. Until she has to make the right decision for her and the baby. Even if it breaks her heart.

Can they find the forever that they both want or has it all just gone... too far?

My Review:
“When you find your reason for living, hold onto it. Never let it go. Even if it means burning other bridges along the way.” ♥

This series has some of the most beautiful quotes. They are so raw and emotional that it makes you wish you had something special with someone. While I truly enjoyed this series, I have to say there were some issues I had along the way.


First, I was so irritated with . I just wanted her out of the picture as soon as possible. Her character was useless and a filler in my opinion. She was such a baby through out the series. Who cares about your problems? We have bigger ones: Blaire is having a baby with Rush who can't focus on his family because you're acting like a child! Another thing that annoyed me was Blaire's attitude. I understand that her father left her and her mom and she has some issues with men, but Rush was doing everything in his power to be with Blaire. He was desperate to get Blaire back, but she didn't even have the decency to tell him she was having his kid! Like what!? Besides this ridicules drama and some annoying characters--that's you --I enjoyed reading this series.

This book wasn't as good as the first or the second but it held it's own in certain areas. Another thing I liked was how the author teased us with Grant and 's point of view, setting the stage for another series but with different characters. I came to love the characters. Rush and Blaire made a cute couple. They finally get their happily ever after (isn't that what we all want?) even if that meant they had to burn a few bridges along the way.
Posted by Sammy at 12:16 PM