Stalked by Death #2 by Kelly Hashway 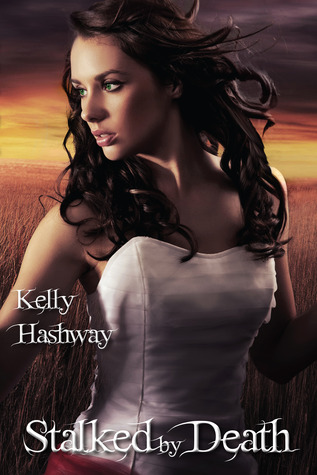 Jodi knows that any slip-ups made by the Ophi--a special group of necromancers born under the 13th sign of the zodiac--will fall on her shoulders... and that Hades is just waiting for them to screw up so he can wipe out the Ophi line.

Unfortunately, Jodi has only convinced one Ophi to join her school: A hot guy named Chase who jeopardizes her relationship with Alex. Jodi loves Alex, but Chase can enhance her powers with just a touch—making her stronger than any Ophi has ever been.


Her mixed emotions send her powers surging out of control, and the dead start rising without her conscious summoning—exactly what Hades doesn't want! If she chooses Alex over Chase, she may lose the battle to Hades, leading the Ophi race to extinction. If she chooses Chase, she might be able to stop Hades for good… but lose everything else.


Jodi needs to figure things out fast--because death is stalking her at every turn.

I cannot express how much I love the spin on mythology that Hashway created in this series. Medusa has always been an interesting topic in mythology and making her the victim and a hero instead of a villain was a very clever idea. It drew me into the story line and completely surprised me.

I really enjoyed the first book and I was filled with excitement to discover what would happen in this book. And I have to say, it blew my mind. The first book introduced this idea of Medusa being a hero, but the second book took it to a whole new level. I was squealing like a little girl and didn't put this book down until I knew every detail. This book didn't suffer from the 'middle books always suck-ass' syndrome. Instead it was action packed with mature developed characters. And I loved every minute of it!
There was a lot more character development to Jodi and Alex. Not only in their relationship, but with other characters in the book as well. After Hades ominous warning that if the Ophi screw up again he will come to kill them all, there has been a lot of craziness going on. Jodi is trying to keep all the Ophi safe, trying to recruit more Ophi to join her side, learning how to control her powers, training for the unexpected, and hoping to avoid an all out war with Hades.

Jodi has a lot riding on her shoulders, but she has managed to handle everything well. She learns from her past mistakes and grows as a leader. She is learning who she can trust and that it is okay to ask for help every now and then. To help her through this difficult time she has her friends, Alex and Medusa.

This series has really surprised me. It was fast paced, action packed, with lovable characters. I can't wait to find what happens in the third installment!
Posted by Sammy at 9:40 AM