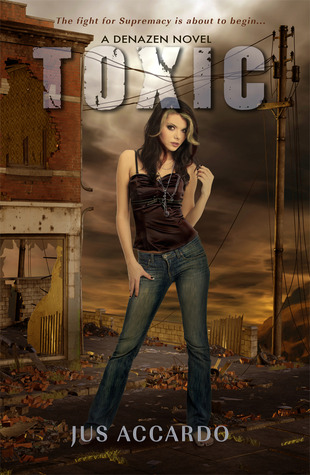 When a Six saved Kale's life the night of Sumrun, she warned there would be consequences. A trade-off. Something taken for the life they gained. But Dez never imagined she'd lose the one thing she'd give anything to keep... And as if it's not enough Dez finds her immunity to Kale fading, the Six brought in to help Kale learn to control his killer touch starts drooling on him the moment they meet. Worse than that? Jade can touch Kale. But bimbo Barbie is the least of Dez's problems.

After Dez and Kale got away at Sumrun, her father lost not only his most powerful weapon but an important piece of the Supremacy project. Forced by Denazen to remedy the situation, he poisons Dez and offers her a choice--surrender to Denazen for the cure...or die. Determined to find a solution that doesn't involve being bagged and tagged--or losing someone she loves--Dez keeps the poison a secret. But when a rash of Denazen attacks hit a little too close to home, Dez is convinced there's a traitor among them. Jade.

Sacrifices, broken promises, and secrets. Dez will have to lay it all on the line if there's any hope of proving Jade's guilt before they all end up Residents of Denazen. Or worse, dead...

The Cover:
Kind of sucked in my opinion. The first book had such a nice cover. It made me want to read this series. But I guess I wasn't feeling it with this cover. On the bright side we get an idea of what Dez looks like!

The Beginning:
Holy Macaroons!!!!!!!!!!!!! The beginning was mind blowing. I was sucked back into this crazy world. And from the first page everyone and everything has gone mad!! Dez, Kale and the other Sixes are still hiding from Denazen. Obviously, Denazen won't give up hunting Dez and her friends, but when things get out of hand, Dez is poisoned by her own father, forcing her to either willingly join Denazen or risk death.  On top of all this danger, Dez is gutted to find out that she has lost her ability to touch Kale without getting hurt. But her worries and insecurities are increased when the new girl, Jade shows up. She happens to be completely immune to Kales powers and is dead set on stealing Kale away from Dez.

The Middle:
The middle was kind of boring. Jade was extremely annoying. She was trying so hard to get Kale and Kale was playing right into her hands. He was so stupid in this book. I really liked him in the first. He knew what he wanted and was always on Dez's side. But in this book he was defending Jade, sticking up for her, going to parties with her, which made it seem like he was in love with her. Kale didn't realize that he was hurting Dez with his behavior and on top of that Dez was coping with loosing her ability. It was annoying to the point that I was ready to shoot someone (preferably Jade).


The Ending:
The ending was crazy! Of course Kale was going to sacrifice his freedom for Dez. That was a given. BUT what wasn't a given was the fact that there was an unexpected ally looking out for Kale. At the end of the book this unexpected character surprises everyone and gives hope to Dez that she will be reunited with Kale soon!
Posted by Sammy at 10:50 AM