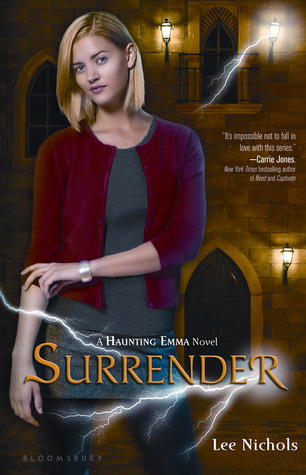 Goodreads Synopsis:
After a devastating battle at headquarters in , the ghostkeeping world is in shambles. When Emma and Bennett return home, they are determined to defeat the wraithmaster, Neos, forever. But it's not going to be easy. Bennett's parents kick him out when they realize he is still using drugs to enhance his powers. Emma is convinced her aunt has come back from the dead to warn her of a new threat. And worst of all, Neos is using wraiths to possess the students at . If the ghosts manage to take over the entire school, even Emma won't be strong enough to stop them. But if either she or Bennett sacrifice his or her powers, they might be able to save the ghostkeeping world once and for all-and break the "ghostkeepers lose their powers when they fall in love" curse. The question is: who will be the one to surrender all power?


Fast-paced and romantic, this conclusion to the Haunting Emma trilogy will thrill readers as it brings the ghostly mystery to a close.

My Review:
This series has finally ended with a bang. I was skeptical about the ending of Surrender since I wasn't a big fan of the second book but, this book took me by surprise.
Emma and her friends are dealing with the aftermath of the battle at Knell; the ghost-keepers headquarters in . Everyone is confused and hurt trying to figure out what to do next. However, Emma is now more determined than ever to banish Neos once and for all. To do this, she must first locate the ashes of Neos in Thatcher academy with the help of her friends. But that's easier said then done. She's going to need everyone's help including Bennett. But Bennett has been kicked out from his house because he has been using a powerful drug to enhance his powers so he can be with Emma. Can Emma defeat Neos and save Bennett before he destroys himself? Well you're gonna have to read to find out what happens.
Overall, a good book to read. Sure it had its annoying moments and I just wanted to hit someone. But the characters came to their senses and did what had to be done in order to save their families and friends. Very quick read and an interesting take on ghosts.
Posted by Sammy at 10:49 AM