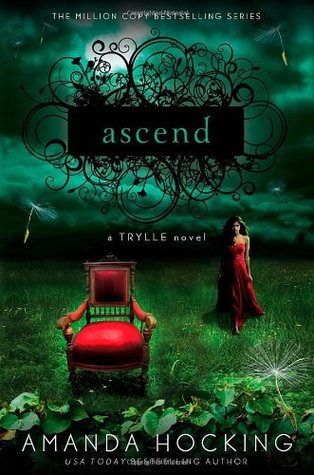 Goodreads Synopsis:
Wendy Everly is facing an impossible choice. The only way to save the Trylle from their deadliest enemy is by sacrificing herself.  If she doesn’t surrender to the Vittra, her people will be thrust into a brutal war against an unbeatable foe.  But how can Wendy leave all her friends behind…even if it’s the only way to save them?


The stakes have never been higher, because her kingdom isn’t the only thing she stands to lose. After falling for both Finn and Loki, she’s about to make the ultimate choice…who to love forever. One guy has finally proven to be the love of her life—and now all their lives might be coming to an end.

Everything has been leading to this moment.  The future of her entire world rests in her hands—if she’s ready to fight for it.

My Review:
This is it. The Queen is on her death bed. The King wants her throne. And the only one standing in his was is Wendy. He will do anything and everything in his power to get what he wants. Even if that means killing his own daughter.
This final book has great character development, heart pounding action, and excellent romance. Wendy can be overly dramatic. If you have read my reviews for the first and second book, then you know how irritated I got with her character. She is making rash decisions and not giving any thought to the advice being thrown at her. Sure she has soon to be-queen status, but that doesn't mean she can do what ever she wishes. She needs to think of her people and kingdom and not put everyone's life in danger. However, she still had her witty humor that had me chuckling at times.
The other characters in this book have grown on me. I really liked Tove, but I wished we had gone deeper into his character. Finn was ridicules. I came to hate him by the end of this series. In the second book he became very cold and moody towards Wendy and she got tired of it. So when Finn finally decided he wanted Wendy, she had already moved on to Loki. I have to say that I came to love Loki. Sure he was a bad guy who turned good, but his character was very well developed.  Mysterious, strong willed, and genuine--he was a great character with a heart. I didn't expect this love triangle to end up like it did, but it was less cliché with real consequences. However, I wasn't really amazed by the ending. Everyone got a happily ever after which isn't a bad thing. But I was hoping for more action and a emotional roller coaster ride.
The series as a whole was fascinating. I liked learning about Trolls and the world Hocking created was very imaginative. Definitely a quick read, enjoyable, and fun.
Posted by Sammy at 11:00 AM