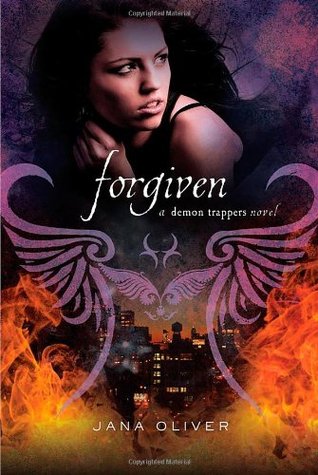 The days are growing darker for 17-year-old demon trapper…
Riley Blackthorne. With her father’s reanimated body back safely, Beck barely speaking to her because of her trust with a hunky fallen angel and a deal freshly made with Lucifer, she has enough on her hands to last a normal teenage lifetime. Though she bargained with Heaven to save his life, her ex-boyfriend Simon has told the ’s elite team of demon hunters that she’s working with Hell. So now she’s on the run, at the top of everyone’s most-wanted list.

Caught between her bargain with Heaven and her promise to Lucifer, Riley fears the final war is coming—and it may be closer than anyone thinks…

My Review:
In the previous book, Riley was running from demon hunters, seeking refuge with a necromancer named Mort and reuniting with her dad back from the dead. The demon hunters suspect Riley of siding with Hell and in retaliation took Beck into their custody for questioning.
In this book, Riley has to prove that she isn't in cahoots with the devil, save her dad's body, free his soul, keep her promise to heaven and Lucifer, investigate holy water scandal, be normal, go to school, cope with Ori's betrayal *angry gasp*, and deal with Beck. As always Riley handles herself beautifully. Not many Young Adult authors are able to create characters that have so much potential and realistic ability. So thumbs up to Oliver for creating such a lovable, realistic and admirable character.
Even though Riley has so much on her plat, she has a best friend, Peter supporting her at every step. Their relationship is a huge welcome change from the usual YA guy/girl best friend 'I'm in love with you drama'--neither has feelings for the other, they genuinely care about one another as best friends should. Riley's relationship with her father is also well written. They're willing to make life altering sacrifices--it was sweet and heartbreaking.
Beck on the other hand, was unfairly harsh to Riley for losing her virginity. I hated how Beck acted. He expected Riley to wait for him until she turned 18, while he slept with Justine--a reporter digging up Becks past-- and other girls. But when Riley slept with one guy he threw a fit. Though my favorite part was when Riley set him straight, I think Beck may have redeemed himself a bit, but I would have loved it if Riley had made him suffer just a little more.
One character I found hilarious was Harper. He was Riley's master and a jerk, but in some twisted way he seemed to care for her. He was irritable as ever, but I have to admit I found that their conversations made me giggle:

“You could have let that thing flatten me, but you didn't. Why?”


“I could ask you the same question.”


She was too tired to edit her mouth. “You're my master. I couldn't let that thing kill another trapper, even if I think he's a total asshat.”


Harper looked at her for a long time then cracked a toothy grin. “And you're one mouthy bitch, but you're my apprentice. I don't need the reputation that my people die because I don't protect them.”
That was fair.”

Overall, lots of action and adventure. I fell in love with all the characters. Oliver truly did a wonderful job in creating this unique demon concept, with well written characters and the very interesting 5 grade demons. I loved the Magpies, who stole all the shiny objects--they were harmless and adorable.
Posted by Sammy at 9:21 PM