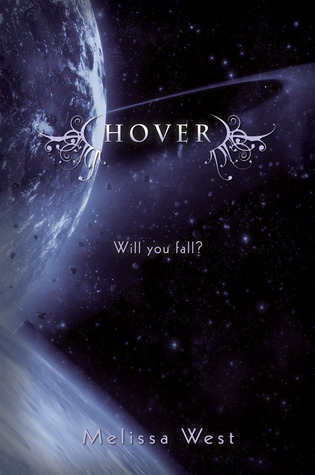 On Earth, seventeen-year-old Ari Alexander was taught to never peek, but if she hopes to survive life on her new planet, Loge, her eyes must never shut. Because Zeus will do anything to save the Ancients from their dying planet, and he has a plan.

Thousands of humans crossed over to Loge after a poisonous neurotoxin released into Earth's atmosphere, nearly killing them. They sought refuge in hopes of finding a new life, but what they became were slaves, built to wage war against their home planet. That is, unless Ari and Jackson can stop them. But on Loge, nothing is as it seems...and no one can be trusted.

Usually the sequel to an amazing book is, well, equally amazing. But with Hover, I didn't feel the 'oh my god I love this book' spark that I did with Gravity. Sure it was action packed, it had great character building, but at times it just got boring. I felt like I was dragging myself through this trying to get to the good parts.

Ari has been taken from Earth and is now on an entire new planet with the Ancients and Jackson. But nothing is ever as it seems. There are too many secrets surrounding Jackson and Ari which seem to cause a riff in their relationship. They push and pull for the first half of the book not being able to agree on any plan to take down Zeus. Zeus has dangerous plans of his own, which make it difficult for Ari to kill him. Since he has guards at his heels around the clock. Not being able to kill Zeus and having issues trusting , Ari is extremely confused and angry. Plus her parents back on Earth are hiding more secrets from Ari and refusing to tell her anything. But one thing is for sure, Ari needs to figure out who to trust and what to do to save the remains of two planets. Because if she doesn't all hell with break lose and Ari will be the center of it all.

Overall, a very good series. The first book was brilliant and the second could have used more "oomph". I fell in love with the characters of Jackson and Ari. They make a cute couple besides the whole Alien thing. is very strong, brave, loving, patient and stubborn in his ways. Ari is equally stubborn but with leader qualities. Though I didn't like this book as much as I thought I would, I still can't wait to read what happens in Collide. Hopefully, there is a lot more action and romance.
Posted by Sammy at 10:11 AM