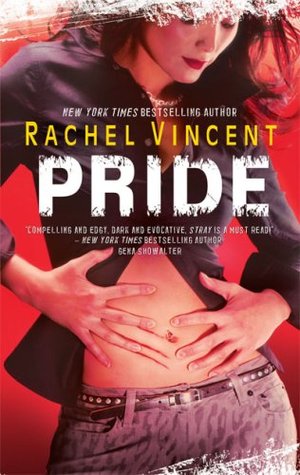 Genre: Shifters, Adult Paranormal
Paperback: 425 Pages
Published: February1, 2009
Series: Shifters
1. Stray
2. Rogue
3. Pride
4. Shift
5. Alpha
Rating:★★★★
Goodreads Synopsis:
I'm on trial for my life. Falsely accused of infecting my human ex-boyfriend--and killing him to cover up the crime. Infecting a human is one of three capital offenses recognized by the Pride--along with murder and disclosure of our existence to a human.I'm two for three. A goner.

Now we've discovered a rogue stray terrorizing the mountainside, hunting a wild teenage tabbycat. It's up to us to find and stop him before a human discovers us. With my lover Marc's help, I "think" I can protect the vulnerable girl from both the ambitious rogue and the scheming of the territorial council.

My Review:
Pride continues shortly where Rogue left off. Faythe is on trial for her behavior and it seems like her entire life has been put under a magnifying glass because she chooses to stand up for herself and fight for what she wants. The Pride males aren't used to this aggressive behavior from a female were-cat and now all of Faythe's mistakes have come back to bite her on the ass once again. At first, Faythe is worried the verdict will be to cage her or declaw her, but soon she realizes that execution is also on the plat, especially in the eyes of an alpha, Calvin Malone--what a bastard, I hope he gets what's coming to him.

But the trial is put on hold when several hikers go missing in Faythe's territory and a female stray has shown up. This changes the playing field if Faythe is able to figure out who is behind these killings. Trouble finds Faythe wherever she goes. She's like a magnet for everything dangerous and menacing. Though I love that her relationship with her father has grown. They have a mutual respect for each other and are able to express their feelings without fighting every step of the way. However, Faythe's relationship with Marc is still crazy. They both love each other, but neither one of them will step up to the plate and speak the truth. Though I did hate how Faythe treated Marc in the previous books, like he was some kind of animal (haha I guess he was), but at least show some respect for the man you claim to love. They have a long way to go before Fathye and Marc can have a real trusting relationship. And I hope in the next book they come to their senses.
Posted by Sammy at 9:34 AM