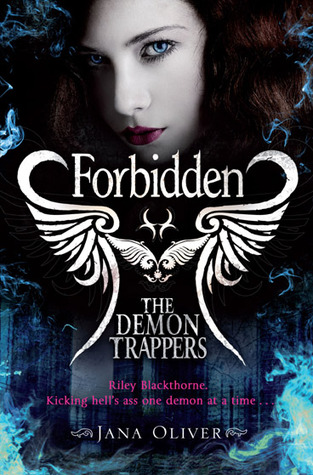 Riley Blackthorne is beginning to learn that there are worse things than death by demon. And love is just one of them…
Seventeen-year-old Riley has about had it up to here. After the devastating battle at the Tabernacle, trappers are dead and injured, her boyfriend Simon is gravely injured, and now her beloved late father’s been illegally poached from his grave by a very powerful necromancer. As if that’s not enough, there's Ori, one sizzling hot freelance demon hunter who’s made himself Riley’s unofficial body guard, and Beck, a super over-protective “friend” who acts more like a grouchy granddad. With all the hassles, Riley’s almost ready to leave altogether.


But as Atlanta’s demon count increases, the Vatican finally sends its own Demon Hunters to take care of the city’s “little” problem, and pandemonium breaks loose. Only Riley knows that she might be the center of Hell’s attention: an extremely powerful Grade 5 demon is stalking her, and her luck can't last forever…

After finishing this book:

My God. This was a mind blowing sequel! Riley and her guild are back and dealing with the aftermath of the attack on the Tabernacle. Besides this little set back, there are other problems in Riley's world: Her dad is back from the dead by an evil Necromancer hungry for power, the Vatican has sent the 'Big Dogs' to fight these demons, her boyfriend isn't the same anymore (he's kind of possessed) and to top it off, heaven and hell are recruiting Riley to their respective sides. And by adding Ori's appearances to this interesting mix, all hell is breaking loose...literally!

Speaking of Ori, I'm very intrigued by his character. He claims he has come from heaven to protect Riley, but his ominous behavior is giving me the chills. I just know he's up to no good! Then there is the grade five demon who has taken a liking ( in an evil sense) to Riley and won't stop following her around since the Prince of hell wants something from her. Regardless of these dangers, Riley has grown more as a character. What I liked about her in the first book was her strength, but also her vulnerability. She was brave when it required her to be, but at the same time, she was delicate and broken. She doesn't lose this balance in this book, but still battled with the implications of the first book and made life altering decisions in this one. I truly liked that she made mature choices. Especially, when it came down to Beck. After being a little rude, Beck deserved all the anger Riley threw at him. Though I somewhat understood Beck's harshness towards Riley since there were some chapters from his point of view (POV).

And speaking of Beck, I would have liked to read more chapters from his POV, but he took a backseat in this book due to the intense plot brewing in Riley's life. And we get to learn a few secrets about Beck and why he is the way he is. Though you'll have to read to find out what that is, I don't wanna spoil the details! Riley and Becks relationship continues to progress into something sweet and friendly. If you're like me, then you want Riley and Beck to get married like NOW, have lots of babies, and get a Magpie for a pet. And even if that doesn't happen in this book, there were some extremely cute moments between arguments and I'm excited for their relationship to become something more. I'm just waiting for Beck to realize that Riley is truly the girl of his dreams, but that idiot won't open his eyes, no matter how many times I yell at him! -_-
Posted by Sammy at 10:59 AM