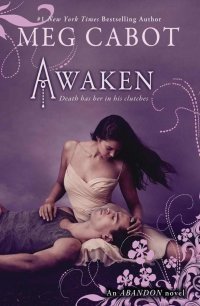 Death has her in his clutches. She doesn’t want him to let go.

Seventeen-year-old Pierce Oliviera knew by accepting the love of John Hayden, she’d be forced to live forever in the one place she’s always dreaded most: the Underworld. The sacrifice seemed worth it, though, because it meant she could be with the boy she loves.

But now her happiness — and safety — are threatened, all because the Furies have discovered that John has broken one of their strictest rules: He revived a human soul.

If the balance between life and death isn’t fixed, both the Underworld and Pierce’s home back on earth will be wiped away. But there’s only one way to restore order. Someone has to die.

So the finale was better than I expected. If you read my review for Underworld then you would know I didn't like it as much as I liked the first book. But Awaken was overall, a good finish to this series.

But first things first.... IS THAT JOHN ON THE COVER!!!!!!???????? *fans herself* And Pierce really knows how to dress herself even though she's dating death!

Anyways.... a lot has happened since the last book. Pierce is busy trying to save John from permanent death, save the Underworld from the Furies who are causing major chaos in the underworld, save her cousin Alex, who was brought back from the dead by John, save her friend Kayla who was dragged into the Underworld, while trying to keep the balance between good and evil due to Johns actions in saving Alex.

A lot was happening and it got confusing at times. One thing I didn't like was the introduction of new characters Reed and Chloe. They weren't introduced in the previous books and by the end of this one, they had become some of the top characters. Like what!? Overall, an okay read. I don't think I would be rereading this series any time soon, but the whole concept of Hades and Persephone was very intriguing. If Mythology is your thing, then I definitely recommend you read this book. Or if you're bored then this is a quick read if you don't mind being confused and bored to death at times.
Posted by Sammy at 10:41 AM