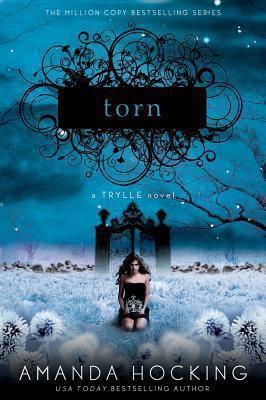 When Wendy Everly first discovers the truth about herself—that she’s a changeling switched at birth—she knows her life will never be the same. Now she’s about to learn that there’s more to the story…

She shares a closer connection to her Vittra rivals than she ever imagined—and they’ll stop at nothing to lure her to their side. With the threat of war looming, her only hope of saving the Trylle is to master her magical powers—and marry an equally powerful royal. But that means walking away from Finn, her handsome bodyguard who’s strictly off limits…and Loki, a Vittra prince with whom she shares a growing attraction.

Torn between her heart and her people, between love and duty, Wendy must decide her fate. If she makes the wrong choice, she could lose everything, and everybody, she’s ever wanted…in both worlds.

As a special gift to readers, this book contains a new, never-before-published bonus story, “One Day, ,” set in the magical world of the Trylle.

Torn was a very interesting story to read. I don't think I have ever read about trolls before so this was a new idea that I liked a lot. At first I pictured these trolls to be like this: 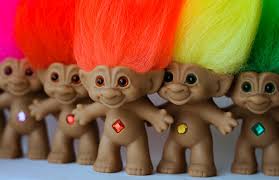 .....you know kind of fun and colorful! But as I read this book, I realized they were cruel and terrorizing. In the first book we meet Wendy who finds out she's a troll and was switched at birth by her mother, who happens to be the queen of trolls. Which makes Wendy a princess. As this book continues, we reunite with Wendy inside this strange new world she is still figuring out. However, we go deeper into this world of Trylle. Wendy starts to learn the politics behind switching children and what role she has to play in the near future.
We also get to meet characters from the previous book, accompanied by new ones who are fascinating. There was Finn, the sweet protector who Wendy has a crush on. Then we have Loki, the dangerously irresistible bad boy turned good. He is a great new addition to this series. Loki creates more tension and makes Wendy rethink what she knows. He pushes her to think outside the box and finally Wendy has come to her senses. She has stopped taking orders from everyone and has started to put her foot down. She is more feisty, protective and mature. Then we get to meet Matt, Wendy's brother who is so supportive and caring, especially when Finn starts acting cold and moody---which I was a bit torn (haha) about; I was hoping their romance would continue. But fear not! There is new 'flirtation' developing and it has a forbidden love feeling to it.
Torn was an interesting sequel to Switch and I enjoyed learning more about the feud between Trylle and Vittra. I now understand why they are enemies. However, it doesn't excuse the fact that the Vittra are still the bad guys. So if your interested in a quick read with enjoyable characters I definitely recommend this.
Posted by Sammy at 12:33 PM