Before I Wake #6 by Rachel Vincent 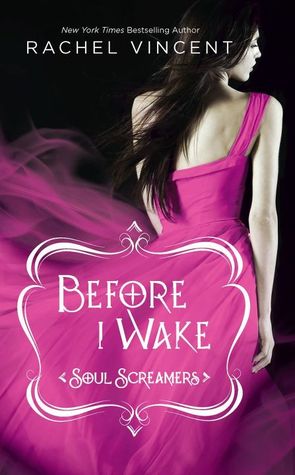 Goodreads Synopsis:
I Died on a Thursday. Killed by a monster intent on stealing my soul.
The good news? He didn't get it.
The bad news? Turns out not even death will get you out of high school…
Covering up her own murder was one thing, but faking life is much harder than Kaylee Cavanaugh expected. After weeks spent "recovering," she's back in school, fighting to stay visible to the human world, struggling to fit in with her friends and planning time alone with her new reaper boyfriend.
But to earn her keep in the human world, Kaylee must reclaim stolen souls, and when her first assignment brings her face-to-face with an old foe, she knows the game has changed. Her immortal status won't keep her safe. And this time Kaylee isn't just gambling with her own life….

Before I Wake is set one month after the events of If I Die. Kaylee has died and like most people she believed she will be in heaven when she wakes up. Instead she has been turned into a grim reaper which makes her a very special mix of grim and banshee. Her life is still complicated. She is adjusting to her undead way of living, her new job her new boyfriend (EEPPPPPPPPPPPP!!!!!! TOD!!), and her new popularity. Kaylee's first day at school starts off with a bang when her boss orders her to retrieve a stolen soul from a rouge reaper, Thane--who Tod left in the Netherworld to be tortured by Avari after he threatened Kaylee. So the reappearance of Thane puts everyone on edge especially Kaylee since he will be coming back for her soul. With Thane now working with Avari, Kaylee and her friends must stop them before Avari causes more death. If Avari succeeds then all hell with literally break loose and many innocent lives will be taken.

This exciting series will keep you on the edge of your seat. At times I found my self screaming, yelling, annoyed, angry, and happy. I was filled with many emotions and I truly enjoyed it. If you have doubts then just throw them out the window because it will not disappoint you!
Posted by Sammy at 10:21 AM