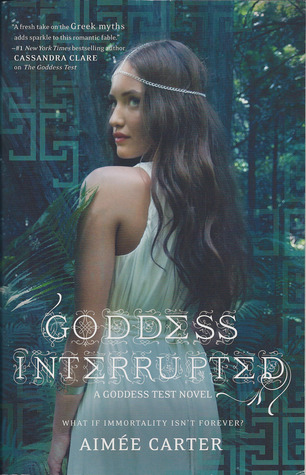 Kate Winters has won immortality. But if she wants a life with Henry in the Underworld, she'll have to fight for it.


Becoming immortal wasn't supposed to be the easy part. Though Kate is about to be crowned Queen of the Underworld, she's as isolated as ever. And despite her growing love for Henry, ruler of the Underworld, he's becoming ever more distant and secretive. Then, in the midst of Kate's coronation, Henry is abducted by the only being powerful enough to kill him: the King of the Titans.


As the other gods prepare for a war that could end them all, it is up to Kate to save Henry from the depths of Tartarus. But in order to navigate the endless caverns of the Underworld, Kate must enlist the help of the one person who is the greatest threat to her future.
Henry's first wife, Persephone.

When I read The Goddess Test I was a little disappointed, but saw enough potential in Carter that I was curious about the sequel, Goddess Interrupted. Plot wise it is a little better although I still had issues with many of the characters. But overall, I give it the same rating as the first book. It was okay. Nothing too special.

I found the biggest problem was with the characters. Some were confusing and others seemed like fillers. The character of James in my opinion was not needed. There was no need for a love triangle because you could clearly tell Kate was falling for Henry. Another problem was how all the characters argued constantly about who they had an affair with. Who the heck cares? Lets get back to the actual plot. Wait...what was the actual plot?? Hmm...I have been thinking the same thing.

Well for starters, Kate didn't even want to be married to Henry. Although she was forced into doing it and giving up many things the plot still seemed dull. I love the whole Hades/Persephone myth and that's why this series seemed so interesting. But after reading the first and second books, I find that I'm not dying to continue this series. However, since I hate leaving a series in the middle I know I'll get around to it eventually...


Other than these ridiculous issues, like I said the plot picks up a little. We get to see many many action scenes. While some of them were pointless, others seemed too unrealistic. During several of the clashes, the other gods leave Kate at home because she's underpowered. Other times, she is blocked from getting a full picture of what's going on. I couldn't get a sense of what the author was trying to portray Kate as. Was she supposed to be a strong willed character or a wimp? I just don't know and I honestly didn't care. (But the cover is gorgeous though!)
Posted by Sammy at 9:21 AM