My Soul to Steal #4 by Rachel Vincent 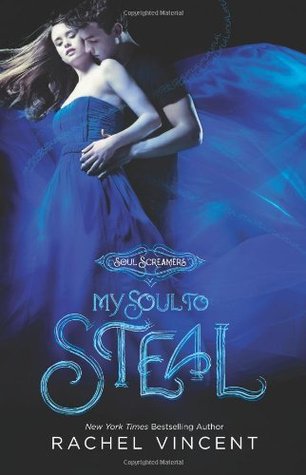 Trying to work things out with Nash—her maybe boyfriend—is hard enough for Kaylee Cavanaugh. She can't just pretend nothing happened. But "complicated" doesn't even begin to describe their relationship when his ex-girlfriend transfers to their school, determined to take Nash back.


See, Sabine isn't just an ordinary girl. She's a Mara, the living personification of a nightmare. She can read people's fears—and craft them into nightmares while her victims sleep. Feeding from human fear is how she survives.

And Sabine isn't above scaring Kaylee and the entire school to death to get whatever—and whoever—she wants.

Figuring out who brought back Demon's Breath from the Netherworld was a difficult task for Kaylee and her friends. They went through a lot of obstacles trying to fight for their lives, but they did it. Nash is in a lot of trouble. He has a problem with Demons Breath which leads Kaylee to break up with him because he lied to her and abused her body to further his addiction to drugs. I was so shocked when I found out it was Nash who was involved. Why did he do it? It was sad to see them break up, but secretly I'm glad because Tod is growing on me.

Kaylee is sad, hurt and alone. She doesn't understand why Nash did it, but she is disappointed in him. With having no one to talk to, Kaylee seeks Tod for emotional comfort. As they start to talk and get to know each other, they realize they have feelings for each other that are just now starting to surface. But Kaylee has a lot of healing to do before she can jump into another relationship...not to mention Tod is dead and a grim reaper. But when Nash's beautiful ex-girlfriend Sabeen comes into the picture to steal him away, Kaylee realizes she can't be with a lying, cheating boyfriend. Sabeen is litreally a NIGHTMARE, someone who scares people to feed off of their energy to stay alive and she wants Nash back at all costs. Kaylee's relationship with Tod starts to get closer when there is a new threat in town. Avari, a hellion, is still after Kaylee's soul and the best way to get it is by hurting her family and friends. Avari sets out to seek Kaylee's soul by targeting her best friend. But when things go wrong and Kaylee's best friend almost dies, Kaylee is now determined more than ever to find Avari and put an end to all of this madness.

Like the previous books, this book was exciting and action packed. I loved the relationship between Tod and Kaylee. They both are lonely, sad, and looking for comfort. Nash and Sabeen are both idiots. I didn't like them as characters because they were selfish and didn't care who they were hurting. I'm glad these selfish idiots are together because they deserve each other. The next book in this series is sure to be a page turner and I can't wait to see Tod and Kaylee finally get together. They are perfect for each other!
Posted by Sammy at 9:46 AM