Perfect Opposite by Zoya Tessi 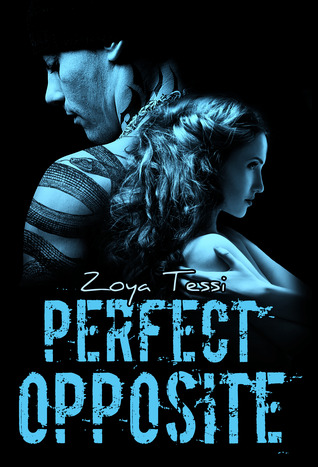 Their wishes were simple and modest. Fate had other things in store though, and she can be a real bitch sometimes.

- All he wanted was to get the job done and somehow to endure those long months playing nanny to a spoiled little rich girl. Without strangling her with his bare hands in the process. Well, it is going to be much easier said than done.

- All she wanted was to escape the past and live like any other nineteen-year-old girl. Her plan definitely didn’t include the arrogant, tattooed savage, with his awful mo-hawk hair and lack of social graces, whose only mission was to stick real close and mess up her life.

But, people aren't always what they seem to be, are they?

Being the daughter of a mobster who is on the FBI's most wanted list kind of sucks. Everywhere Sasha goes her fathers goons follow her. She goes to the mall, they are right there with her. She goes to the grocery store, they are right behind her. They might as well be with her in the bathroom. *insert eye roll* Sasha has had enough and tried to put a stop to it, but she just can't get rid of them. So when she starts college and changes her last name things seem to be going her way. She can't spot any of her fathers goons and she feels that she finally got her way. But one day when she gets a txt from an unknown number she knows something's up.

When she meets her father at the park all of her worries and annoyance with his business come flooding back. Sasha is in danger and one of her fathers associates wants her dead. Sasha refuses to leave her well rounded life for her fathers mistakes. Fearing for her safety, Sasha's father assigns a body guard to watch over her 24/7. This causes Sasha to freak out. Living with a body guard is one thing, but living with one who has weapons and works for her father is outrageous. Not to mention how will she explain to her roommate about a stranger who will be attached to her hip 24/7.

Alex (the hot bodyguard) and Sasha don't get along at all. They hate each other, they banter, they argue, and they insult each other constantly. But Alex has a job to do: keep Sasha alive no matter what. Sasha was acting like a stupid little girl. I understand that her life has just turned upside down, she is "chained" in a way, but stop acting like a child. At numerous occasions, Sasha tried to escape Alex's side only to get caught in something dangerous. This just proves she was immature and childish and that's why Alex called her Princess.


Speaking of Alex... he is just a  big chunk of deliciousness. Ahhhhhhhhhhhhhh! Team Alex all the way! He is a total thug, with tattoos, piercing and the mo-hawk. His personality is not charming at all which makes him even more attractive. I turned into a puddle of goo every time he talked. Anyways Alex and Sasha have many differences, but they start liking each other. By the end of the book my jaw had hit the floor. I didn't see this twist coming and I was shocked! Overall, I LOVED THIS BOOK! It was a quick read, fast paced, and the story was sweet and dangerous.